Landscape designers use a variety of methods to indicate (label) the particular plant species associated with each symbol used in a plan. Here we discuss the various ways of labelling plant symbols in plans using gCADPlus landscape design software.

The simplest approach for labelling plant symbols in plans is to label a symbol with a piece of text. The text can be placed in the middle of the symbol or a line/leader can be used to indicate the species as show in the figure below. Four examples of different symbol labelling using leaders with text are shown below. The first shows only text (RS) centred in the middle of the symbol, the next symbol uses a leader with no arrow, the third a leader with arrow and the fourth a leader with a custom arrow. 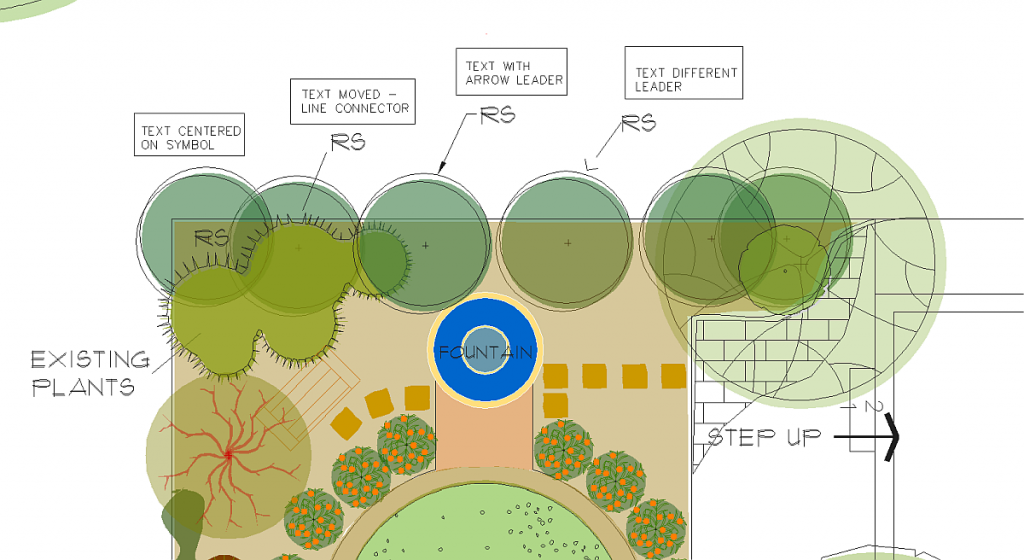 Here is the first of two small movie that discusses some of these common methods.

The second movie how to label plant symbols by using some of the automated labelling tools available in gCADPlus. We show how to automatically stamp a code in the centre of each symbol and generate a plant schedule.

A method that produces a clean, uncluttered an informative look in landscape plans is shown in the figure below. Each species is labelled with a number indicating the number of plants of that type of species in a nearby group .

Click on the image to load a high resolution PDF copy of the print to check out the labels. 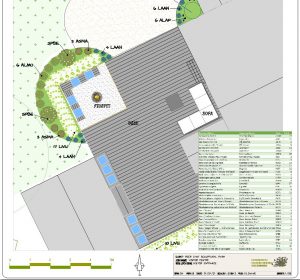 Labels in the figure above were applied using the SmartLabel command. It provides considerable flexibility in the way in which a symbol represent a particular species is labelled and can be used in conjunction with the automated plant schedule tools.

Tip: Symbols must be associated with an entry in an accompanying plant database file before the SmartLabel command will work. Symbols are tagged using the sequence gCADPlus >>Plant Schedules and Lists > Set data to a plant.

Check that a symbol has been tagged by selecting the symbol and look for SppTag information in the gCADPlus Properties box. 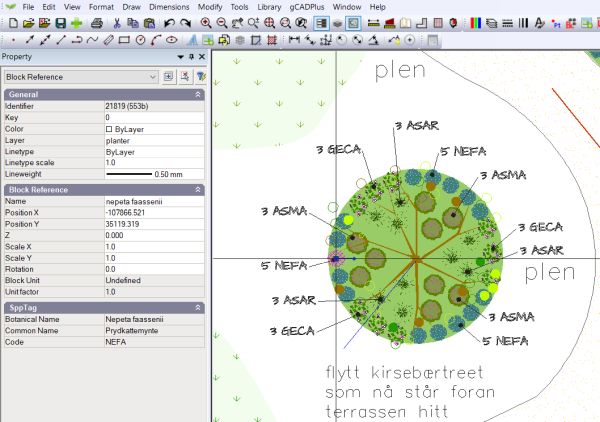 SmartLabel is activated by typing or selecting the command from the the gCADPlus drop menu using the following sequence gCADPlus > > Plant Schedules and Lists > Smart plant label.

Tip: Because the label is drawn as a leader, repositioning the label if the design gets crowded is easy.

Showcasing the use of the SmartLabel command

This movie showcases a method developed by the team at Hagedesign in Norway for presenting detailed views of parts of a larger design. A series of overlapping rectangles tied to zone were established in modelspace and linked to layout views; some at a scale of 1:25​ and some at a scale of 1:100. The SmartLabel tool was also used to label and count groups of symbols of the same species for a less cluttered presentation.