TIN Maker is an application used to take survey data and build a TIN model. A TIN is used in survey and GIS work to represent surface topography. The abbreviation TIN stands for Triangulated Irregular Network. Much useful information can be derived from a TIN – contours can be interpolated, sections cut, surface cut and fill volumes calculated, etc.

Here is an example of a TIN surface imported to gCADPlus landscape design software. 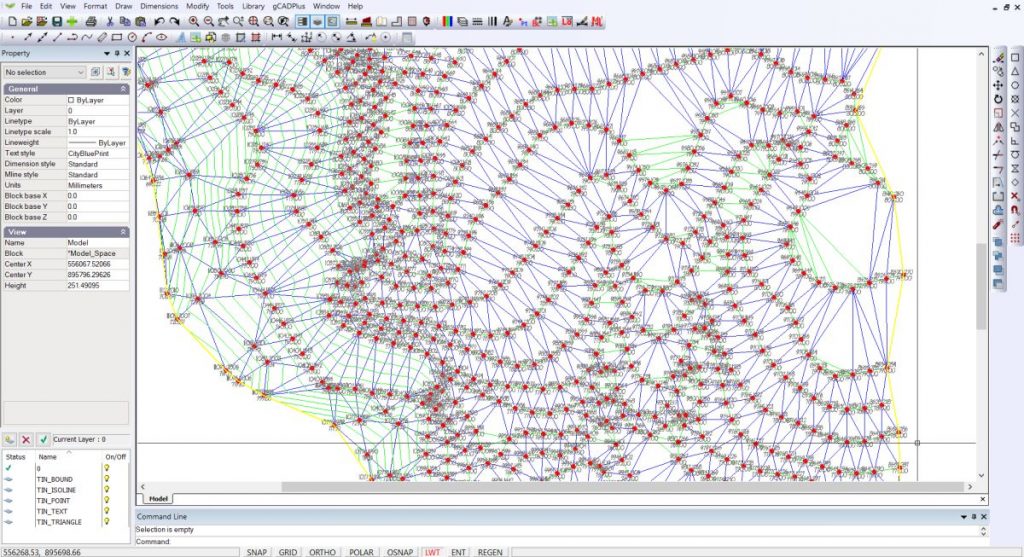 Want to know more about TINs?

Here is a link to a Wikipedia article on TINs.

The figure below shows some typical input survey data of the type used by TIN Maker. Data from automated digital survey equipment is often passed to survey software such as Liscad and point data exported in the form of a comma-separated ASCII text file.  In this example, each record in the file contains just 3 items – a code the X, Y and Z values.

Tip: These input data files must have the .txt extension. 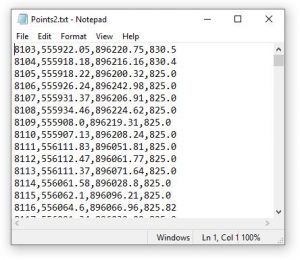 View a TIN in TIN maker

The image below shows a typical TIN made by importing the data above to create a series of independent blue triangles covering a site. The dark grey channel running from top left to the bottom right of the image represents a watercourse while the green lines represent contours.

The triangles, shading, and contour lines are generated from ASCII files containing X,Y and Z point values. These point data values are often obtained directly from digital survey equipment and imported to the software. Once loaded and the TIN generated, extra data such as point code or z value can be displayed on the model as shown below. 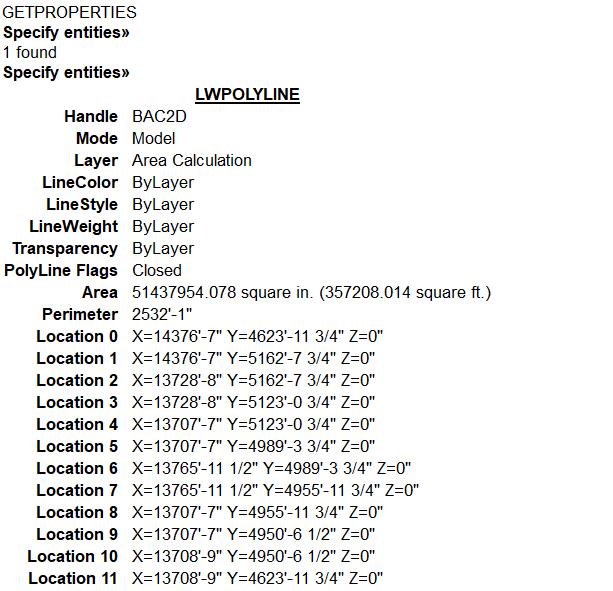 The green lines represent contours and in later versions of the software, it will be possible to export isolines as DXF files with the elevation of the polyline corresponding to the contour interval.

A list of TIN files recently worked on is also available.

Part of a  TIN file can be saved by locating a boundary around a sub=set of points.

X,Y,Z data can also be exported using an option on the menu.

Several sample point data files are available for testing TIN maker. The figure below shows the first dialog box that shows when the sample set 2 is imported into TIN maker. It indicates the number of points loaded and offers an option to check for duplicate points.

Choosing to check for duplicate points can be useful. Choosing Yes, pops up the dialog box shown below. This allows entry of a delta value for tolerance checking enabling removal of points that are perhaps too close to an existing point.

In this sample set case, with the delta value shown, the sample set is clean and there were no duplicates. The figure below shows the result. The location of the point and some additional data are shown.

Tip: If you work with relatively few data points they may be difficult to see. Use the wheel of the mouse to zoom in and the points will show up.

Note that items such as Triangles (for the TIN), Isolines (contours) are ticked (active), but as no boundary has yet been established, no TIN data is visible.

For that to happen, we need to move to the Tools drop-down menu and choose AutoBoundary. This tool is used to create a boundary within which triangulation will occur.

If the automate boundary option is chosen, the software searches for the outmost points and creates a boundary delineated by the yellow line as shown in the figure below. The software provides the user with a dialog box to control the search criteria.

Once the boundary has been established, it is time to switch to the Triangulation drop-down menu and generate the actual TIN surface. the figure below shows the result of selecting Triangulate.

Now the options selected as active on the View drop-down menu come into play. The TIN surface shows as a set of blue triangles, contours (isolines) are shown in green.

Note that this menu provides tools for editing TIN elements.

Tools for manipulating points are located here. It is possible to add extra points from a different (perhaps later) survey. Points can be deleted, or subsets of point data defined inside a new boundary can be exported and so on.

The figure below shows a view of this model with the triangles off, but filled – the triangle option in the View drop-down menu is turned off to show a rather nice view of the ground topography.

Note that at this stage of development of the software it is not possible to view the terrain model as a 3D object.

Not every text file can be read by the software; it needs to be correctly formatted. The figure below shows an example of a CSV file that cannot be read by TIN Maker. This data came from a depth sounder and GPS device during an underwater survey. The data was presented without a text code.

Tip: It would be good to have an option that would automatically generate a point number based on the record number in the data set.

Use the link on the File drop menu.