We would encourage you to create your own planting symbols rather than rely just on those provided with GardenCAD. It is a simple matter to do this, just create your symbol, select all the elements (lines arcs circles etc.) which make up the new symbol, right-click and give the new symbol a name. The figure below shows a new symbol for a rose created by a GardenCAD user. 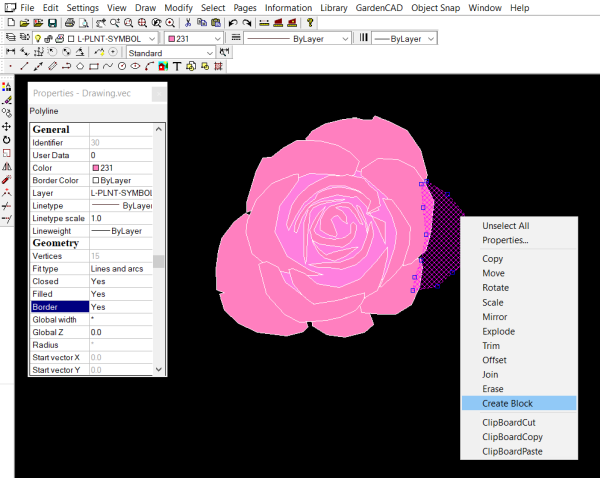 Note: It is not mandatory, but if you would like to make your symbols work in the same manner as native GardenCAD symbols, you need to follow the instructions set out below.

Start a new drawing. [Do not use a template].

Tip: Make sure that you know how to make a layer current. You will want to move to a layer, (say L-PLNT-SYMBOL) and change the drawing colour to an appropriate shade of green or whatever to indicate the plant species that you are designing for. You need to be able to switch back to drawing by layer when you have finished this.

Centre point of circle at Cartesian coordinate 0,0 on layer L-PLNT-CONSTRUCTION with a diameter of 1000 units (radius 500 units). This means that the symbol when displayed on layer L-PLNT-CONSTRUCTION  will have a canopy diameter of 1 meter. Draw the second circle on the same layer with a radius of 15 units as the central indicator. Do not use a cross for this as the cross will be in an awkward position after a rotate. This gives us a symbol which we can use to show the client a rough draft of the design – the full high coloured version comes next.

Here different colours are commonly used along with the PLINE (Polyline) command. We often use the PLINE command to trace around the approximate circumference of the circle (using the circle on the L-CONSTRUCTION layer as a guide and then use the PEDIT (Properties in GardenCAD) command to change the ‘fluidity’ of the shape.

Next, you might use the PLINE command in combination with the HATCH command to make small highly coloured blocks (canopy1, canopy2 etc.). Stamp these into the drawing on this new layer. You might care to make a group coloured lighter and place these in the 0-90 degree arc to give the appearance of the sun shining on the symbol.

Draw a couple of branches and make these into blocks (possibly called branch1, branch2 etc.) Stamp these over the circle to make the shape. Test the symbol both on the screen and when plotted to paper. Save the symbol in your own block library.

Please send us a copy of your new symbol (to info@gardencad.net) so we can include it in the downloads page for others to use.

Adding a symbol to the GardenCAD library

After testing a symbol, save it to the appropriate place in the My Documents > GardenCAD folder.

This figure below shows the folder structure at the point of saving a symbol in the standard folder set.

Tip: If the symbol is given a name that starts with a character that is alphabetically higher than U, it will appear at the top of the browse list.

Tip: A much better approach to the use of new symbols is to add them to your standard template.